My dudes, this book has been a long time coming. I have, quite literally, been intending to read this book for years. In fact, I think I was maybe 21 or 22 when I first found out the Arthur Conan Doyle wrote things other than The Adventures of Sherlock Holmes, and not only had he written other things but that some of those other things involved dinosaurs! I love dinosaurs, seriously. They are so cool. Dinotopia is genuinely one of my favourite movies. I once sat on the floor of the Warehouse in New Zealand looking through the bargain bins of DVDs for the ONE COPY they had for over an hour (I did find it, in the end). 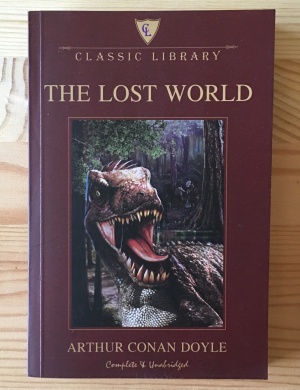 Anyway. The Lost World has, therefore, been a book I have been meaning to acquire and read for rather a long time. Happily, my sister (who knows me very well and has a memory like a steel trap) bought me a copy for my birthday this year! That’s right, I have my very own shiny copy of The Lost World, first in the “Professor Challenger” series by Arthur Conan Doyle and a book about dinosaurs by one of my favourite authors. I am happy, indeed. More importantly, once it was actually in my possession I made the time to read it!

Now I actually don’t know what I was expecting, to be honest, because in all those years I never bothered finding out more about the actual subject and content of the book, secure in the knowledge that “ACD + Dinosaurs = Happy CJ”. And that held true, honestly. I may have gone in biased (see previous equation), but I thought this was a really good adventure novel. Aside from the obvious (seriously, dinosaurs in the modern era?!), the story was written well enough that, in the time period of the story, this sort of thing may not have been so very far from the realms of possibility. And that’s pretty cool. ACD also weaves in the Jurassic with the modern fairly well, giving Professor Challenger lines that quite neatly stitch up a few of the oddities in the novel (how on Earth did two species of anthropoid evolve, side-by-side, into completely different cultures of incredible enmity given the incredibly small land mass?!). I will be honest, the story wasn’t entirely unpredictable: while there were bits in there I was pleasantly surprised by, nothing really occurred that was shocking in the sense that I didn’t see it coming.

All things considered, though, I really enjoyed this book and I have every intention of trying to pick up the next book/s in the series. You know, eventually. And preferably in the same edition as the first one….

Worth a read, people!

Image credits: my photo, of my book.