Would you look at this, three reviews within about a fortnight!

Ok, the first thing you really need to know about The Nutcracker is that is was a total cover buy. First of all, look at it. 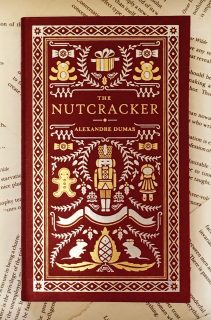 Tell me you wouldn’t want that majesty sitting on your bookshelf. Second, this is actually the second title in this series that I have, the first being Poems of the Irish People. I really, really love the new Barnes & Noble pocket editions(these are published by Fall River Press but there isn’t a page specifically for them, so here’s a link and may Loki be with you), I think they’re absolutely gorgeous and I can’t wait to get my mitts on more of them.

That said, when the second one I saw was The Nutcracker, I was really happy about it because this is a book that I have considered reading off and on for yeeaaarrs. Since my sister watcher the Barbie and the Nutcracker film, if we’re being completely honest. And I kind of want to get hold of it in Dumas’ original French now, but that’s neither here nor there.

This book had the expected elements of the story of the Nutcracker that I had expected through years of osmosing the story through popular culture, but it also contained elements I absolutely did not see coming and had no idea existed, and it always makes me so very happy when that happens. I’m used to being able to pretty accurately predict what a book will be about generally, give or take some of the finer details. Something I’ve noticed is that, despite the classics having been around for a good long while and having inspired so many contemporary authors, it’s the classics that most often surprise me.

The Nutcracker was sweet, and weird, and oddly hilarious. Also, frickin’ seven-headed mice, man. Gave me the shivers, that did. And Godfather Drosselmeyer is so, so much creepier in the book than he’s been in any of the cinematic versions of this story. I mean, still interesting and cool? But so, so much creepier. Yeesh.

Such a great read, guys.

Image credit: my photo, of my copy of the book.