Friends! I am officially among the ranks of DC fans, and I am going to be honest with you, it’s because of Wonder Woman and Aquaman. I mean, I might be a fan of the Bat and Supes one day, but for now it’s WW and AM all the way.

As with soooo many of the comics I read, Aquaman’s new 52 was recommended to me by Ethan at Secret Headquarters in Beaconsfield (Melbs). We were bonding over the sheer awesome of the film, and I asked him what would be the best comic to start with for a total noob in the DC comic-verse. He pointed me to the Aquaman New 52 Volume 1. 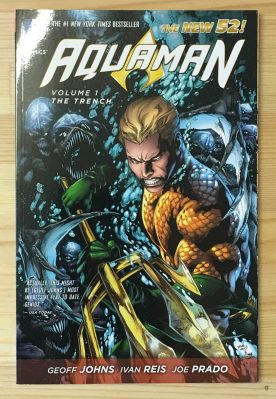 Boy, Ethan knows me well. I read this baby the afternoon I bought it, and then ordered in Volume 2. That is where we are at. Fantastically, I recognized a lot of the elements in the movie in the trade, and that was really cool for me. Obviously, things are different in the comics (Jason Momoa looks a little different to the traditional Arthur Curry, for one!), but it was really heartening to see such strong similarities in the storylines.

The artwork was fantastic, and let’s be frank that’s absolutely crucial to enjoyment of a comic. The plot can be unbelievably good and if the artwork doesn’t do it for you, it’s not likely you’ll continue with the series. Tellin’ it like it is, fam. But there were no worries with this book, and from the looks of Volume 2 there will continue to be no worries on the artwork front.

The Trench was a really enjoyable read for me, and I think a brilliant introduction into the Aquaman mythos (not counting the movie) as well as the overall DC verse. As a dedicated Marvel fan, DC anything has to be introduced gently. The exception to this is, of course, Wonder Woman, and I was a die-hard fan of that movie before the first trailer came out (because reasons). I can now honestly say I’m a die-hard fan and the movie is awesome. The Aquaman movie is also awesome, not least because Jason Momoa have you SEEN HIM?! but because they put so much effort into the Atlantis scenes, and you all KNOW how I feel about Atlantis.

All things considered, it’s actually incredible that I haven’t started reading Aquaman long before now, but now that I am, it’s time to properly get amongst it.

Well worth a look, folks!

Image credits: my photo, of my copy of the book.