Ahh, Miss Price. Had I but known you’d been a book character before you were a character in one of the most iconic films of my childhood…

But seriously, folks, I’ve been sleeping on this book. Did anyone else know that this was a book first?! I adored Bedknobs and Broomsticks when I was a kid and I can honestly say that I really still do. I cannot have been the only child that surreptitiously twisted and tapped the bedknobs in the hope of that actually working. Also, Angela Lansbury. Need more be said?!

I found this little gem at the Canberra Lifeline Bookfair (they have several a year), and I was utterly delighted to find it. 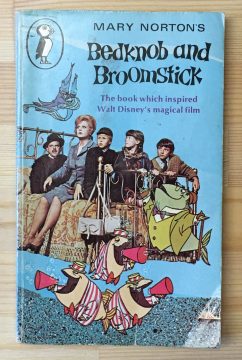 Prior to stumbling across it, I’d had absolutely no idea that one of my favourite childhood films had been based upon a book. I don’t know why I didn’t think of it, honestly, because so many of the other films that dominated my childhood had been books before Disney got hold of them. And, as with many of the other books I’ve read upon which Walt based his movies, he took some liberties with this one. To be fair, the liberty that resulted in the aquatic scenes was totally valid and I continue to support that notion. I am a little sad it wasn’t in the book, though the book itself certainly didn’t disappoint in any other way.

I thought I knew exactly what I was in for when I cracked this book open, but while there were certainly some familiar scenes, in other ways this book was completely alien to me. And can we talk about the twist ending?! Where did that come from?! Why didn’t that make it into the film?! And quite frankly, I’d be interested in a sequel that did a little investigating on that scene of Carey’s at the end….

Ah, Carey. Carey, Charles, Paul and Miss Price. What adventures! Even if they did come about because the kids were blackmailing little buggers (Paul not so much, the kid knew how to keep his trap shut), they did have some fun! Also the odd bit of terror and there was the thing with the cannibals and the witch burnings but look, that could have happened to anyone with a magical bed.

This isn’t a kids’ book in the contemporary sense of the term. I honestly don’t see any child raised in the era of video games and VR being all that impressed with the creations of Ms. Norton, but pretty much any millennial(ish(-aged person out there who remembers the film Bedknobs and Broomsticks as a childhood classic will really enjoy the book itself. I certainly did!

Worth a read, my lovelies.

Image credits: my photos, of my copy of the book.